Increase Engagement and Test Scores with Breakfast in the Classroom

The old saying "Breakfast is the most important meal of the day" has several grains of truth. Many studies have proven breakfast to be a crucial ingredient in school success. Students perform better academically, exhibit better classroom behavior, and enjoy overall healthier diets when they eat breakfast. However, over 70% of teachers are still reporting students arriving to school hungry .
END_OF_DOCUMENT_TOKEN_TO_BE_REPLACED
0 Comments Click here to read/write comments

Child Nutrition: How to Get the Students to Eat Healthy Meals

According to statistics from the Centers for Disease Control and Prevention (CDC), obesity in children has more than doubled over the past three decades and quadrupled for adolescents. Data from the same source also indicates that more than 30 percent of children and adolescents were either over their ideal weight or obese as of 2012.

Food insecurity in children is a significant problem in the United States. According to United States Department of Agriculture (USDA) estimates, 7.8 percent of American households with children were food insecure* in 2015 – a percentage that amounts to 3 million households that were unable to provide adequate, nutritious food for their children. Additionally, in 247,000 households, food security was characterized as very low, indicating periods of disrupted eating patterns and reduced food intake.

Breakfast Really is the Most Important Meal of the Day 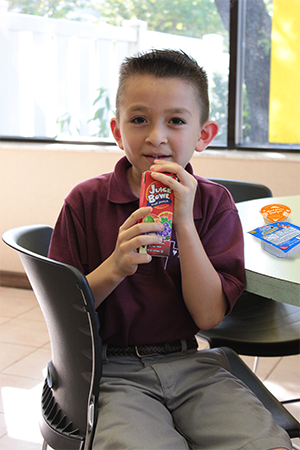 A recent study conducted by David Frisvold, an assistant professor of economics at the University of Iowa, finds students who attend schools that participate in the U.S. Department of Agriculture's School Breakfast Program (SBP) have higher achievement scores in math, science, and reading than students in schools that don't participate. This is consistent with other studies about school breakfast. A brief prepared by the Food Research and Action Center (FRAC), summarizes the findings from research on school breakfast: