Most people know that malnutrition is prevalent in developing countries, but most don’t realize malnutrition is also common among the elderly in the United States. This is a growing problem, as the Census Bureau predicts there will be 92 million people over age 65 by 2060. Malnutrition in our elderly population is a serious issue, due to the associated adverse outcomes.

The causes are multifactorial, but studies have shown nutrition care leads to better outcomes and saves money.

At-risk individuals that receive nutrition care during and after a hospitalization are 3 times less likely to die.1

Malnourished patients have 2-3 times more complications than those not at risk for malnutrition.4

Malnutrition was found in 1/3 of inpatients and resulted in poor hospitalization outcomes and survival.5

59% percent of patients identified with malnutrition risk, were unable to be discharged home with self-care.6

Hospitalized patients discharged with malnutrition are older and sicker. Their inpatient care was 2 ½ times more expensive than those without malnutrition.7

Being underweight is the strongest predictor for hospital readmissions.8 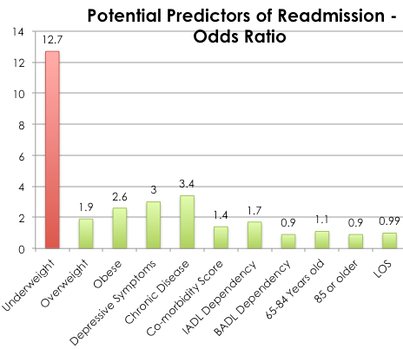