September 10th is National TV Dinner Day, a day that celebrates the convenience of pre-portioned meals.

Since their inception, TV dinners have become a staple in American households. The prepackaged individual servings of meat and vegetables (and sometimes desserts!) changed the way Americans made and ate dinner. Women were no longer cooped up in the kitchen all day, and surprise dinner guests were no longer an issue.

1. The invention of the TV dinner

The invention of the TV dinner is attributed to a handful of different parties. While other companies may have invented the concept, C.A. Swanson & Sons coined the term 'TV dinner'. Take a look at the timeline:

1949: Albert and Meyer Bernstein created Frozen Dinners, Inc. – frozen dinners that were sold under the One-Eyed Eskimo label. Their dinners were served on aluminum trays with three compartments.

1954: C.A. Swanson & Sons created TV dinners – their version of frozen dinners. Swanson launched an advertising campaign to familiarize the public with TV dinners and sold them in retail stores, leading to the product’s success.

C.A. Swanson & Sons’ salesman, Gerry Thomas, is credited with inventing the TV dinner. On his flight home, Thomas noticed the airplane meals were served on trays. He drew a sketch of his own version of the tray and suggested this concept to his company as a solution to their mass amounts of Thanksgiving leftovers. Swanson paired this idea with the biggest trend at the time, TVs, and thus TV dinners were born. The first TV dinners were sold in retail stores for a mere 98 cents!

1960: Swanson added a fourth compartment to their TV dinner tray so that consumers could have … desserts! A couple of the dessert options were apple cobbler and brownies. This addition really sweetened the deal for American consumers, as many homemade meals included desserts.

1969: TV breakfast was introduced. Now convenient meals were available in the morning as well.

In 1973, Swanson released Hungry-Man dinners, which had larger portions than their regular TV dinners. Professional football player “Mean” Joe Greene was the spokesman. Check out the commercial:

Another memorable time for TV dinners was 1986 – the year of the tray. The original Swanson TV dinner tray made its debut into the Museum of American History in 1986 when it was inducted by the Smithsonian Institute. Also in '86, Swanson marketed the first microwave-safe trays. Microwave ovens were becoming a necessity in U.S. households, and with the introduction of Swanson’s microwave oven-safe trays, cooking TV dinners became easier than ever before.

In 1985, GA Foods furthered the impact of frozen meals with the introduction of our dual-ovenable meal trays. As one of the first companies to provide home-delivered frozen meals to seniors, we provided recipients the flexibility to select "what you want to eat, when you want it".

While the meals are no longer referred to as TV dinners, the concept of frozen meals is still cookin’. In 2016, more than 60 years after the invention of the TV dinner, freezers in American households are still packed with frozen, pre-portioned meals. Frozen meals remain a popular food choice because they are easy to make, and come in a variety of options. And, with home-delivered meals from GA Foods, the meals are healthy and nutritionally-balanced too!

The familiarity of frozen meals provides the comfort of home, especially for seniors who have seen frozen meals from the beginning. 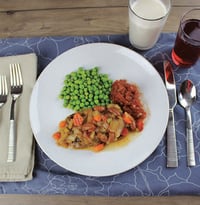