Since 1962, the U.S. has been celebrating National School Lunch Week in appreciation of the National School Lunch Program. This year's celebrations will run from October 10th to 14th with the theme 'Show Your Spirit'. The theme was chosen to remind students, parents, and school officials that a healthy school lunch is a big part of enabling children to get through the day.

The NSLP is the largest federal child nutrition program. It provides school children with meals that are nutritious, balanced and free, or very low cost, every school day. The program was established in 1946 by President Harry Truman when he signed the National School Lunch Act.

October is also National Farm to School Month. First celebrated in 2011, this month is all about connecting schools and local farms with the aim of ensuring schools have a constant supply of healthy produce. The objective of the National Farm to School Network is also to create opportunities related to agriculture, health and nutrition education, as well as to support local and regional farmers.

Benefits of the NSLP

While celebrating National School Lunch Week, it is important to keep the benefits of the program in mind.

The Food Research and Action Center (FRAC) published a Child Nutrition Fact Sheet on the NSLP. They found that the program had a number of nutritional benefits to students.

One benefit is in regard to the quality of meals served in schools. In order for schools to be reimbursed for the meals they serve, schools must adhere to strict federal nutrition standards. The lunches must provide one-third, or more, of the recommended quantities of key nutrients. Reimbursable meals also do not exceed the limit of 30 percent fat, and have a maximum of 10 percent saturated fat.

Academic performance has also been shown to be enhanced by healthy school lunches. Research conducted by the United States Department of Agriculture (USDA) has established that kids who participate in the NSLP have healthier lunches than those who bring lunch from home or don't participate in the program for other reasons.

Another benefit of the NSLP is that it provides an opportunity to teach children about healthy nutrition at an early age. This can positively impact their food choices for the rest of their lives.

The NSLP has been instrumental in keeping kids in school until they graduate. The National Center for Education Statistics (NCES) releases an annual report on education in the U.S. and other countries, and the NSLP has been an invaluable source of data to establish the number of students living in poverty. However, this is done with the awareness that it should not be confused with the actual number of overall population living in poverty.

For instance, a report filed on April 16, 2015, indicated that in 2012, just a little over half of the students in public schools were eligible for free or reduced-fee school lunches. This was in contrast to the actual poverty rate of public school students which stood at 22% in the same year.

In 2012, the NSLP fed over 31 million children every school day. All the students at schools participating in the program are eligible for regular price lunches but there are several ways that a child can become eligible for free or reduced-price lunch.

The NSLP has been instrumental in keeping children in school until they graduate. NCES statistics for the 2007-2008 school year indicated that there is a strong link between poverty and students dropping out.

The Condition of Education Report published in 2010 indicated that high poverty secondary schools produced fewer students who attended four-year colleges; 28% of graduates from high-poverty schools completed four-year college courses compared to 52% of those who graduated from high schools with low poverty levels.

One thing to celebrate during the 2016 National School Lunch Week is the higher number of elementary and high school students who stayed in school because they were ensured a filling and healthy lunch.

You can find different tools and guides to celebrating National School Lunch Week on the School Nutrition Association website. A child who wants to go to school to develop their potential, should be able to do so without worrying about what they will be eating. 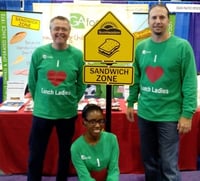